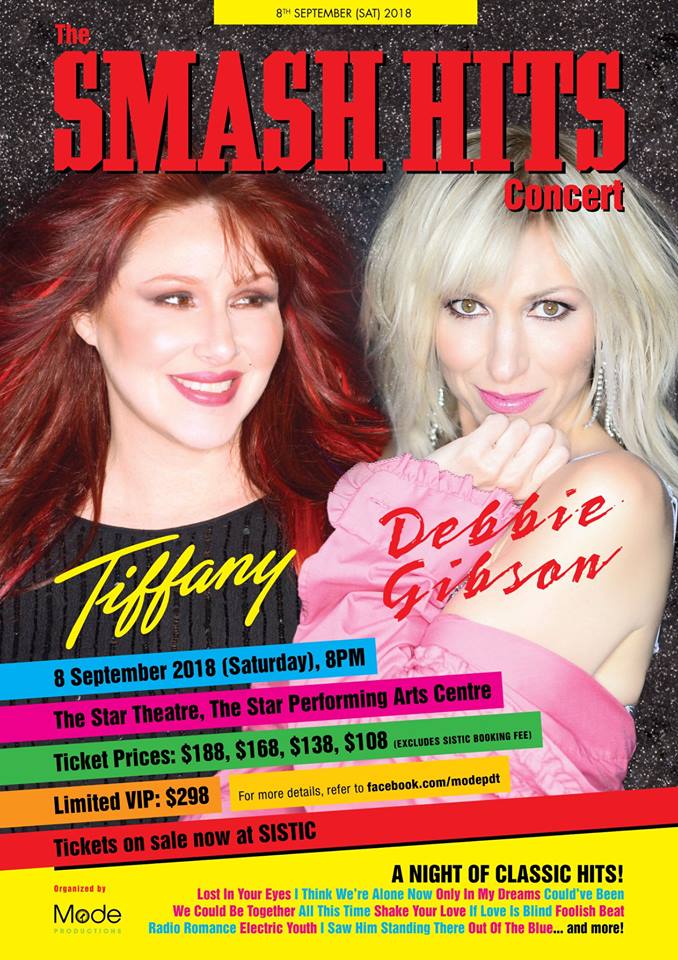 8 September 2018 was the date – a date with my teenage idol – none other than Debbie Gibson!  I remember probably I was 16 or 17 when she launched her ‘Electric Youth’ album.  It was an instant hit in Singapore!  I love every single song.  It was my youth and we were then listening to a lot of 70s/80s English songs, but her songs were so different, all written by herself and really spoke about our youth!

I bought tickets pretty late as I was not certain of my busy schedule as I might be working on other projects now weekends too.  So happy I managed to get tickets though quite high up and managed to persuade my elder girl to accompany me – to be back in my teenage years again hahaha!

Time really flies.  However, I really missed Debbie Gibson’s songs.  I am familiar with all her songs from her first album.   Her songs are all so high energy with her cool and nimble dance works!  Wish I could dance like her.  Her high pitch was amazing and I tried to mimic her a lot!  Her slow ballads are also so soothing to listen to with easy and meaningful lyrics.

For this concert, I was really looking forward to see Debbie Gibson in action LIVE.  I also loved Tiffany songs a lot and knew some of them pretty well.  Both of them are our 80s inspiration and should never be forgotten! I really appreciate their singing so much, songs that we grew up with!

The concert started with Tiffany singing solo and introducing some of her new beautiful songs, they are really nice and I hope to hear them more soon on our radio!  Tiffany’s vocals I would say was so powerful and matured a lot, I love it!  The whole audience was dancing wildly with her!

Finally, my beautiful Debbie Gibson appeared after the intermission!  She still looked so good and trim, fit and danced amazingly.  She started singing and I could hear that she sounded different, but all because she has been battling Lyme Disease since 2013 which affected her physically and I believe her vocals too.  But she still sounded great on all her songs as she tried her best to hit the high notes.  She is really amazing and such a positive person, to continue to pursue her passion and live life to the fullest. No matter what you are always our  idol!  We all love you and your great attitude to overcome your illness.

And it was really sad to know that Tommy Page was supposed to perform together with Tiffany and Debbie Gibson for this concert, however, he passed on last year.  A tribute was paid to him with some of the fans gathering on stage with Debbie to sing his great song.

After the tribute to Tommy, Debbie went on to sing a series of 80s Classics which the audience all knew and sang along as well!

Debbie really inspired me and I even followed her fashion style  by wearing a hat when I   joined a singing competition also named ‘Electric Youth’ back in 1989!

My audition was ‘Lost in Your Eyes’ and I was selected, then went on to the semi-finals and finals.  The finals was held at the Musical Fountain at Sentosa.  It was fun getting to know fellow contestants, I was rather quiet though and I remembered I do not feel any anxiety at all, just enjoying the stage and people around me.  The winner was Gani and I also got to know some friends like  Dulcie Soh (closest to her then, wonder where is she now, as we lost touch….).   All of us the finalists were also required to rehearse with Jacinta to perform with Dick Lee during Christmas (at a stage in front of Wisma Atria along Orchard Road).  It was really memorable and fun!  I was 18 year old then!  Same age as Debbie Gibson.

The line up of Judges was pretty impressive back then – all the famous personalities in Singapore’s entertainment industry.

That was my major competition though I did participate in other competitions since young and in school.  After this competition, I went on a ‘competition spree’ (hahaha) – so fun but then I realised I might not have the look or X-Factor lah!  And I sort of get tired….. after one of my biggest competition – Pioneer Karaoke Competition in 1994 where I was also a finalist.  I remembered we had rehearsals whole day and by the time I got on stage, I was not nervous but just so tired and having a migraine already (probably did not eat much and lack of sleep).  Hmmm.. I wished I knew how to take care of myself then, to be in the condition to perform.  Nevertheless, it was great experience joining Pioneer Competition and the finals was broadcast LIVE on National TV.  My finals song was ‘The Greatest Love of All’.

Debbie was the inspiration and her  songs will continue to live in me.  As life got busy with work and family, I hardly listen to any of her latest albums, which I am going to do so from now on when I have more free time.

Nevertheless, it was good bonding time with my elder girl and we were hungry after the concert ….so we headed for supper!

Debbie – keep it up and we all love you!  Keep the faith, be strong and continue to live life to the fullest!